Posted by Marta R. Stoeckel in Physics on September 28, 2014

The bulk of this week was spent wrapping up acceleration by doing some problems with free fall.  It took some time, but my students are getting comfortable with graphical solutions instead of more traditional approaches.  Students continue to talk about what’s happening in the problem, rather than the formulas, which is great to see.  A few kids are trying to memorize formulas, but watching their peers who use the graphs apply what they know to new situations with relative ease has helped convert the memorizers. 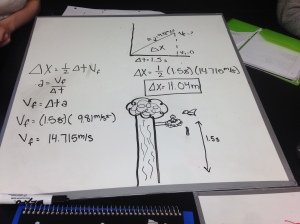 This week was also the first test in physics, and a lot of kids “took the bet and lost.”  Based on the reading and thinking I’ve been doing about assessment and grades, I’m grading a lot less than in previous years.  The trick is, students used to the way most teachers grade translate not graded as not worth doing.  Not surprisingly, these students were not prepared for the test.  That said, even when I’ve graded almost everything, I’ve had students find ways to copy or otherwise get out of doing the daily work, then have the first test hit them like a truck.

To try and address this problem, I stole an idea from Frank Noschese and have been giving my students weekly, self-graded quizzes.  In addition to all the other benefits of frequent, low-stakes assessments, I hoped my students would figure out the benefits of engaging in the daily work early on.  It worked for most of my students, and I saw more students digging into their work after the first quiz, but the stakes were too low for others to catch on.

I’m doing a two-stage collaborative exam for this test, so students will have a chance to recover come Monday.  I’m looking forward to seeing how that goes.  In the future, however, I’d like to work on strategies to get students away from the idea that not graded means not worth doing a lot earlier.  I may make those early quizzes worth more points (at least on paper) or split our 1D motion into separate tests over constant velocity and uniform acceleration so that students will be taking the first test a lot sooner.

Posted by Marta R. Stoeckel in Physics on September 21, 2014

This week, students started using graphical solutions to solve problems for an accelerating object.  I was introduced to this approach by Kelly O’Shea and Casey Rutherford at a workshop this summer.  Rather than showing my students the usual assortment of kinematic equations, I’ve been hammering what has physical meaning on a graph, especially when on velocity vs. time graphs.  When given a word problem, students sketch the motion graphs that describe the problem (especially the velocity vs. time graph) and use it as a tool to solve for the unknown information.  I didn’t get a chance to snap a picture of a student sample, but here’s a problem I did. 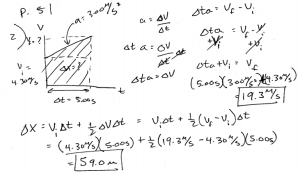 I really like this approach so far.  When I’ve listened in while students were working problems, I hear very different conversations than in the past.  I used to hear a lot of talk about the formulas with students focused on either formula hunting or trying to figure out hard and fast rules for when to use each formula.  This week, I heard discussions about what the objects in the problem were doing, and what were the implications of that.  It was great to see.

Another aspect I really like about this approach is how clearly students see the connections to calculus.  I’ve had several students who took calculus last year say they are gaining an appreciation for why calculus is useful, adding a layer of richness to their knowledge.  Even better, the students who are currently taking calculus feel like they are taking what they’re learning in calculus straight into physics class.

The big challenge I encountered this week is some of my students are struggling with the demands I’m placing on them.  The graphical solutions require them to pay more attention to what is actually happening in the problem than approaches I used in the past.  Students also completed some labs and open-ended worksheets that required them to determine an appropriate approach to the problem at hand.  As a result, students spend at least some time each class period dealing with confusion or struggling with a concept.  I think this is a good thing, but a lot of students find this uncomfortable and wish the class had more direct instruction and traditional worksheets.  Students are consistently getting to where I want them to be by the end of the class period, so I think I’m on the right track  with the scaffolding I’ve been providing.  What’s lacking is a growth mindset a’la Carol Dweck.  Its time for me to re-read her book and work on explicitly incorporating strategies in my classroom to help students develop a growth mindset.

explorations and inspirations... in how we learn science

Brian reflects on his physics teaching

Recording reflections about teaching and learning

Reflections on the dynamics of teaching